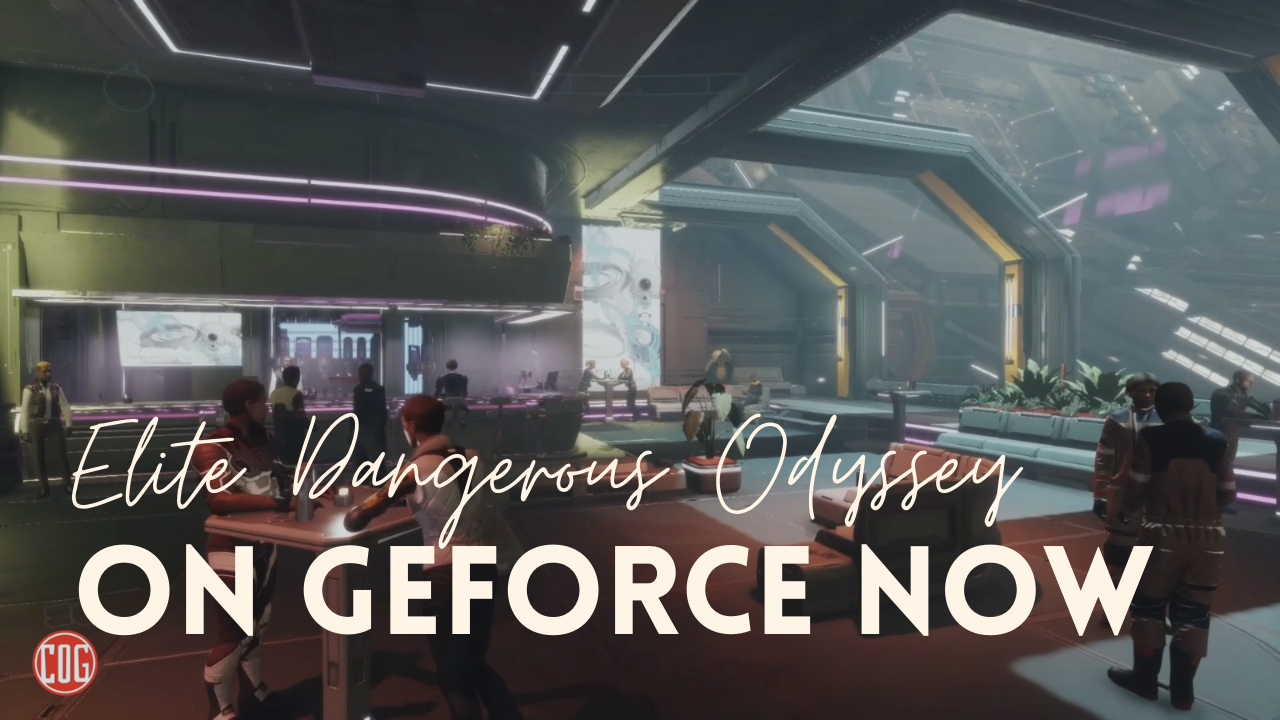 For the last several years, I’ve enjoyed playing Elite Dangerous and the Horizons expansion on and off. Even though my laptop is pushing five years old, I have had absolutely zero issues with the game. It has always been a pleasant experience, even more so after I got my HOTAS setup.

When Odyssey approached release, I craved the same freedom that many other Commanders did: the ability to run around on a planet, to walk inside space stations, and much more. However, it didn’t take long for me to realize that my laptop was unlikely to run Odyssey at a satisfactory frame rate. If Commanders with significantly better rigs than mine had issues, I was unlikely to escape the hell Odyssey seemed to represent. I had all but given up on the idea of even buying Odyssey when I was reminded (I can’t remember how) that GeForce Now supports the Steam version of Elite Dangerous.

It didn’t take long to verify that I would be able to run Odyssey through GeForce Now. A few minutes later, the purchase was complete.

Even though I knew Odyssey was unlikely to behave on my laptop, I downloaded and tried it anyway, just to see. It only took seconds into the demo mission to confirm my suspicion. The frame rates were unacceptably low, even by my standards. Walking around in a space station was even worse. It was essentially unplayable at the same graphic settings that had worked so well for Horizons.

I switched over to GeForce Now. I wasn’t disappointed. It was as if I had purchased a new computer. Walking around inside the space station, as you can see in the video below, was SO much better. You can see a brief glimpse of gameplay below. One thing to note is that in the below video, the graphics settings are set to HIGH.

You can play on ULTRA graphics with GeForce Now as well. There is a noticeable performance hit when you do so (at least in space stations) but it’s not so bad that it’s unplayable. In fact, I’m planning on playing on ULTRA for a bit and see how it turns out when you land on planets, visit settlements and such.

There is one aspect of playing Odyssey on GeForce Now that is problematic. If you’re used to playing with a Thrustmaster HOTAS joystick configuration like I am, you’ll need to use third-party apps like similar to Joy2Key to be able to do so with GeForce Now. Unfortunately, GeForce Now only supports standard controllers, like the XBox controller (and similar) at the moment

However, this is not the end of the world. Once configured, it actually works pretty well. I’ve spent the last couple of weeks working this very same issue and I’ll be sharing a more in-depth post/video about this in the coming weeks. Keep an eye on this space and the COG Twitter account for updates.

Until then, have you tried EDO with GeForce Now? What do you think?