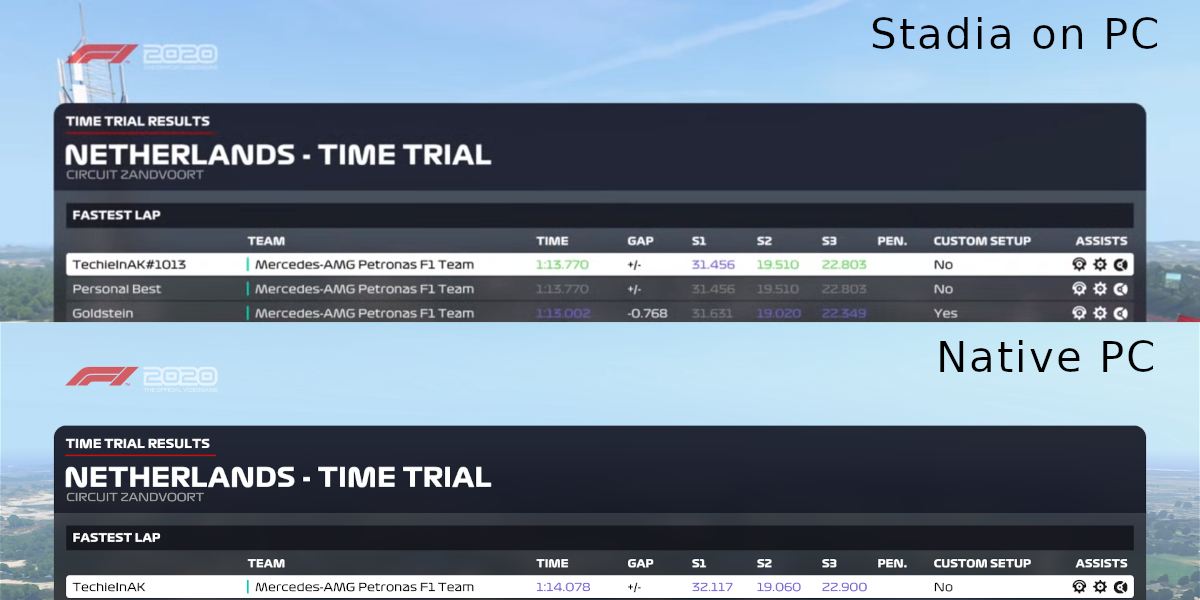 When Google announced that F1 2020 would join Stadia Pro a few weeks ago, I was excited. I’ve had F1 2020 since September for my PC but I’ve always been curious how the Stadia version compares to the PC version. This past week, I finally got my chance to try it out.

My first time trial was a disaster. The car was all over the road and it was more difficult to control than it was on PC with an XBox Bluetooth controller. Could it be that I finally found a game where the controller lag, however imperceptible it normally is, was too great to enjoy a game on Stadia? Since I have the same game on PC, I decided to make a test.

The test in itself is very simple. Pick one track, run a time trial with the same car using the same controller on PC for both Stadia and the PC version of F1 2020.

I picked the Netherlands track for this experiment. It’s a track that I’ve only played splitscreen with my son but I like it for several reasons. For one, it’s a quick. You can drive pedal to the metal for long parts of the track. At the same time, it’s not a straight track. Although it’s relatively high speed track, it’s also winding with a lot of turns, some where you go through just below flat out. It’s a track that requires precise controls to maintain a high speed and get a good lap time. It felt like a good choice for this test.

Before launching into the PC test, I did a Stadia test using the Chromecast Ultra. It’s a different controller, a different display device. I figured at the very least, it would provide a bit of contrast to my PC testing. My laptime: 1:15.286.

Then it was time for Stadia on my PC. Half a dozen laps or so over several sessions gave me a lap time of 1:13.770.

Obviously, this is a very basic test but it’s using the same hardware, the same track and the same car. In the end, the lap time on Stadia using my XBox controller on my PC came out just a bit faster than playing the native PC game. From a controller experience perspective, it was almost to play it on Stadia vs PC native. The controller felt just as responsive in each game.

In conclusion, if I’m going to play F1 2020 on Stadia on my TV, I’ll need to get used to using a different controller. It’s as simple as that. But, this test also suggests that even fast paced games like F1 2020 can keep up just fine on Stadia when compared to the PC version. Not that I needed that evidence to enjoy Stadia but it’s nice to see that my poor performance on Stadia isn’t down to performance of the game…just my thumbs.

Published in Gaming, Simulation and Stadia