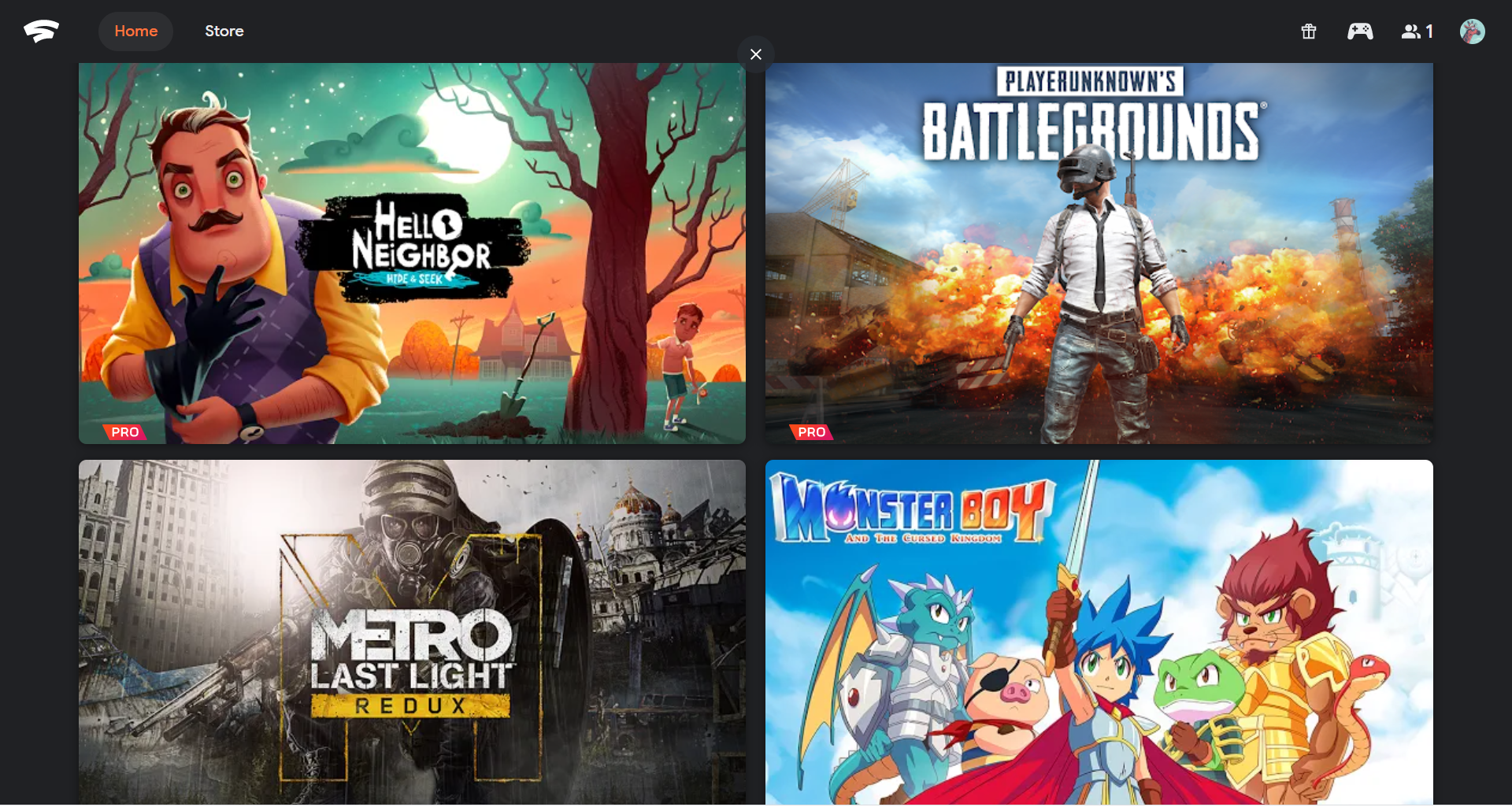 A Look At Stadia And Cloud Gaming

When Stadia was initially announced just over a year ago, a lot of features were showcased as being part of the service. Then when Stadia launched, many of these were missing in action (here’s a summary of them). For me, this caused a bit of hesitation around Stadia. Was Google overpromising but underdelivering? However, despite my initial doubts, the service was intriguing enough that I kept an eye on it throughout the months following launch and then throughout 2020. I tried it out here and there with various free promos, first around launch, then later on in the April-June timeframe. I even purchased a couple of months of Stadia Pro here and there. I just never committed 100%.

Since launch, many of the features missing at launch have been implemented, including Family Sharing and most recently direct to YouTube streaming. Stadia is finally looking more like the vision Google presented originally. The question is whether Stadia has progressed enough since launch to make it a viable alternative to console and PC gaming. As I mentioned in my prior post, the goal for me is to see whether cloud gaming is a viable option to physical hardware. Is it realistic to think that Stadia could take the place of a PlayStation or an Xbox, maybe even a gaming PC?

If you’re not familiar with Stadia, the concept is simple. As opposed to a physical console, like a PS5 or an Xbox X, Stadia is 100% cloud-based. It runs in the Google cloud and the gameplay is streamed to your TV, computer, tablet or phone. You can play inside your Chrome browser with keyboard and mouse or with existing Xbox or PlayStation controllers (among others). Up until a month ago, my interactions with Stadia consisted of using an old Nexus Android TV Bluetooth controller I had leftover from when my Nexus TV unit died many years ago. I’ve used it for years for my PC gaming. I easily pair it with my laptop, my Chromebook, my tablet and my phone. It works perfectly with Stadia. I also use a Bluetooth Xbox controller (I like the rumble feature). Both are plug and play through Bluetooth with Stadia. That means that if you’re anything like me, to use Stadia all you have to do is register on the Stadia website and you’re ready to roll. You can, of course, also buy the Stadia controller from Google and then just buy the games you want in your browser.

Buying games is similar to any other platform. The difference is that you don’t get a physical copy of a game disc, it’s all digital. Of course, one huge benefit of this, as the recent Cyberpunk 2077 launched demonstrated, is that you never have to sit and wait for games to download updates. For me, this is a huge plus. There’s nothing more frustrating that sitting down to play for an hour only to have that time plus some eaten up by updates. With Stadia, you log on, click play and you’re playing the latest version.

What does it cost?

With any new console, price is always an issue. I remember the eye-watering $599 I paid for the original PS3 back in the day. January 10th, 2007 to be precise. It was the beginning of a new era of gaming for me. My first PS3 game, Motorstorm, entertained me for countless hours that winter. These days, a next-gen console will set you back $500, excluding games that cost upwards of $60 or more. In contrast, since Stadia is not dependent on a specific piece of hardware, you don’t have the same high threshold. In fact, to start playing games on Stadia you don’t have to pay a penny. Zero.

Yes, you can buy the Stadia controller and frankly, you’ll have the best experience with the Chromecast Ultra and the Stadia controller that’s part of the Premier bundle. If you go that route, you’d be out $100 at the most, likely less. But ,the beauty of it is that it’s not required to play. It’s optional.

The cost of games are typical of what you’ll find on other platforms. F1 2020, one of my favorite racing series, is $59.99, just as it is on PC and other platforms. There are regular sales, however, and you’ll often be able to pick up great games for much less. Star Wars Jedi: Fallen Order launched at 50% off, Borderlands 3 was $10 bucks in early December and various other games have been steeply discounted recently.

You can also sign up for Stadia Pro. It’s $9.99 and Google is providing a new set of games every month for Pro users to claim. Once you claim the games, you keep them as long as you have your Stadia subscription. You can even let your subscription lapse for a few months and the games are still there when you return. For those that signed up for Stadia Pro when it became available and have claimed every game since now have a sizeable library. With the various promos throughout 2020, I’ve collected a fair amount myself. Just in December, the free Pro games consisted of Everspace, Secret Neighbor, Hitman 2, Kine, Into The Breach, Monster Jam Steel Titans and Outcasts. For $9.99/month, that’s good value, especially considering that you get to keep those games. Stadia also includes a couple of games for free, such as Destiny 2 and Super Bomberman Online, that you can play simply by registering. I suspect we’ll see more of these in the future.

Since Stadia is a cloud service and 100%, it does mean you need a pretty good internet connection. The official minimum requirements sit at at 10Mbps connection for 720p graphics but in reality, you want 35Mbps or higher to play in 1080p and higher. This is a cost you will have to factor into the overall cost of gameplay.

Are There Any Games?

Obviously, for any console to be worth it’s while, you need to have something to play, something that’s fun and will keep you entertained. When Stadia launched, the library was a bit thin but then again, that’s an experience every new console generation brings (not counting backwards compatibility). In the year since, much has changed. There are games from pretty much every genre represented. Action, adventure, racing, sports, FPS, RPG and more. There are mature games, there are games for the whole family. You’ll find high-profile games like Red Dead Redemption 2, F1 2020, The Elder Scrolls Online and Cyberpunk 2077 together with a bunch of lesser-known and in some cases Stadia exclusive games like Outcasters and Submerged. Frankly, today there are so many games on there that it’s hard to decide what to play next. With Stadia Pro in particular, there is never a lack of games to play.

The Stadia library is also starting to feature more and more current release games, like Assassin’s Creed Valhalla and Cyberpunk 2077 just to mention a couple. As the platform grows, I have no doubt that we’ll see more Stadia releases on the same day as other platforms.

If there’s one thing that’s lacking right now, it’s one of the big FPS titles, like Call of Duty or Battlefield. Although Destiny 2 and PUBG are fun, I’ve spent years playing CoD and BF and seeing more games along those lines on Stadia would be great.

For a streaming gaming service to be successful it has to work well. When you stream video, the stream can always buffer to help avoid stuttering and other interruptions. With streaming games, you can’t do that. Every button press is important, every movement matters. With regular PC or console gaming, latency is only an issue when you play online. With streaming games, it’s important every second of gameplay. Too much latency and the platform won’t be attractive.

Initially, I was skeptical Stadia would be able to deliver, especially with me up here in Alaska. But, I was wrong. Somehow, they’ve been able to deliver a very good experience even to me. If I’m 100% honest, when using the Stadia controller with the Chromecast Ultra, I can tell there’s a little bit of control latency in games that require precision. GRID comes to mind. Even my son mentioned that he felt the controller wasn’t as sensitive as what he’s used to. However, it’s negligible enough that after a few hours of gaming, I don’t even notice it anymore. I’ve also read that I may be able to alleviate this somewhat by connecting the Chromecast to my router with an ethernet cable, something I won’t be able to do until after Christmas for practical reasons.

Regardless, I’ve played games like Destiny 2, The Crew, GRID, Outcasters and Metro Last Light without any issues. I’ve spent hours on Star Wars Jedi: Fallen Order without being pulled out of the experience because of controller lag. When I’ve tried Stadia on my Chromebooks with just keyboard and mouse, that barely detectable delay between pressing a button and seeing it happen on screen virtually disappeared. Playing on my phone or on an Android tablet is very similar to playing on my TV. In other words, yes, Stadia works well.

Visually, I rarely have any virtual artifacts. On my TV, Stadia streams games like Star Wars Jedi: Fallen Order in 4K while my laptop has to settle for 1080p. Every now and then I get a warning that my unstable internet connection could cause me to be disconnected but as of yet, those warnings have neither resulted in a degraded experience or disconnect.

Is Stadia A Viable Alternative?

Going back to my original question: can Stadia replace traditional gaming hardware, whether it be a laptop or a console? I’d have to say yes. As more and more games come out, I find myself spending more and more time with Stadia, as are my kids. I’m enjoying it, they’re enjoying it. Although I still do a fair amount of gaming on my PC, I no longer have that desire to invest in a new console because Stadia fills that gap for me. Yes, I have to have good internet speeds to have a good experience but I already have that. Remote work, remote school and various streaming devices already demand that. For me, it’s an expense that would exist whether I use Stadia or PS5.

What I absolutely love about Stadia is that I can play on pretty much any device I have in the house. I can play on my laptop, my TV or my phone or tablet. I can also fire up one of my Chromebooks, should I so desire. The latter part is amazing in itself. The kids, using relatively cheap Chromebooks, can play AAA game titles on their laptops. That’s hard to beat.

In other words, so far I’ve thoroughly enjoyed my time with Stadia.

There’s obviously a whole lot more you can say about Stadia, such as the Family features, the ability to stream directly to YouTube and so much more. But, that isn’t the purpose of this post. You’ll find plenty of sites dedicated to Stadia that can articulate the pros and cons a lot better than I can. For me, the bottom line is that Stadia does what I want it to do, and it does it well. Are there aspects of Stadia that aren’t perfect? Sure, but what platform is perfect? To me, Stadia does what I want it to do, when I want to do it. That meets my need and for me, that’s good enough.

What’s your experience with Stadia been compared to other gaming avenues?

Published in Gaming Services and Stadia