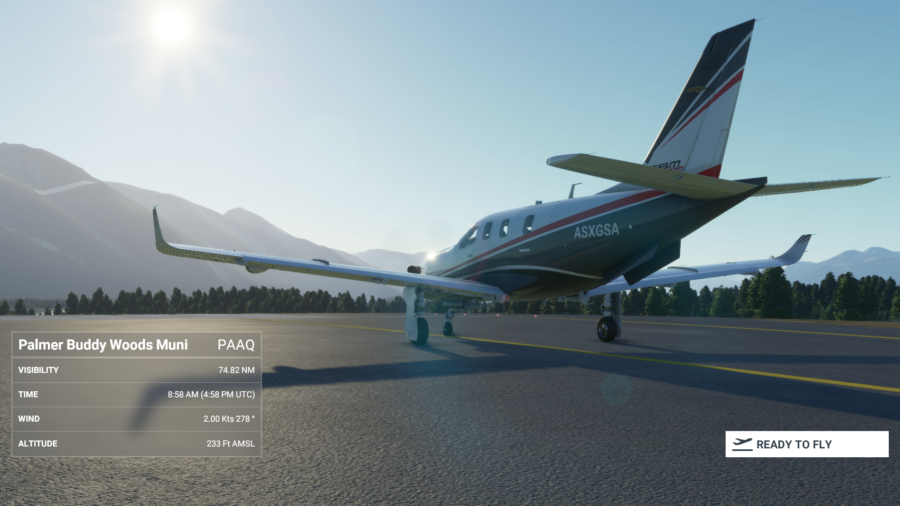 20fps. That’s about what I get on a good day running Microsoft Flight Simulator 2020 on a lower resolution with pretty much everything turned down. It’s not pretty. Many would likely dismiss it as unplayable.

But, I’m not. The reason for that is the world that is presented to the player in FS2020. It’s the real world. It’s each community. What’s amazing about what Microsoft has achieved with FS2020 is that even someone like myself that lives in a smaller community in Alaska can take off from their local airport, circle above the local grocery store and gas station, see the local baseball fields for little league and so much more. I can find my house without issue, I can find the school of my kids, I can find the HQ of the company I work for by just following the roads.

Add to this the live weather systems, the realistic-looking clouds, and FS2020 is a game that’s great, even if it doesn’t play well.

I compare this to Flight Simulator X and Flight Gear, two of the other flight simulators I’ve dabbled with in the past. FS X tried its best to add buildings and vegetation, etc. Flight Gear didn’t do much of that at all beyond adding the local roads. Compared to both of these, even at 20fps, FS2020 is a huge step forward when it comes to the experience.

For me, the main thing about flying around with a plane in a flight simulator isn’t necessarily to get the landing just right. It’s about exploring the world. A small prop plane does just fine for that and Alaska is, in fact, the perfect place to do this. There is so much to see and most of it doesn’t involve the skyscrapers of New York City.

Now, the interesting part about Flight Simulator 2020 is whether it will come to xCloud, Microsoft’s streaming service. The service will be available on September 15th through GamePass Ultimate. IF FS2020 ever becomes available through this service, I can see a huge influx of players gaming through the cloud for the potential of play the game with higher specs than what they can do on their own computers. I know I’d jump on the chance to do that. I’ve seen what can be done with Stadia and Geforce Now. If Microsoft can pull the same off with xCloud and Flight Simulator 2020, I think they’ll have a winning combination on their hands.

For now, I’m going to continue down the road of exploring the world in Microsoft Flight Simulator 2020, even if it doesn’t look like the trailer.

Published in GamePass and Simulation