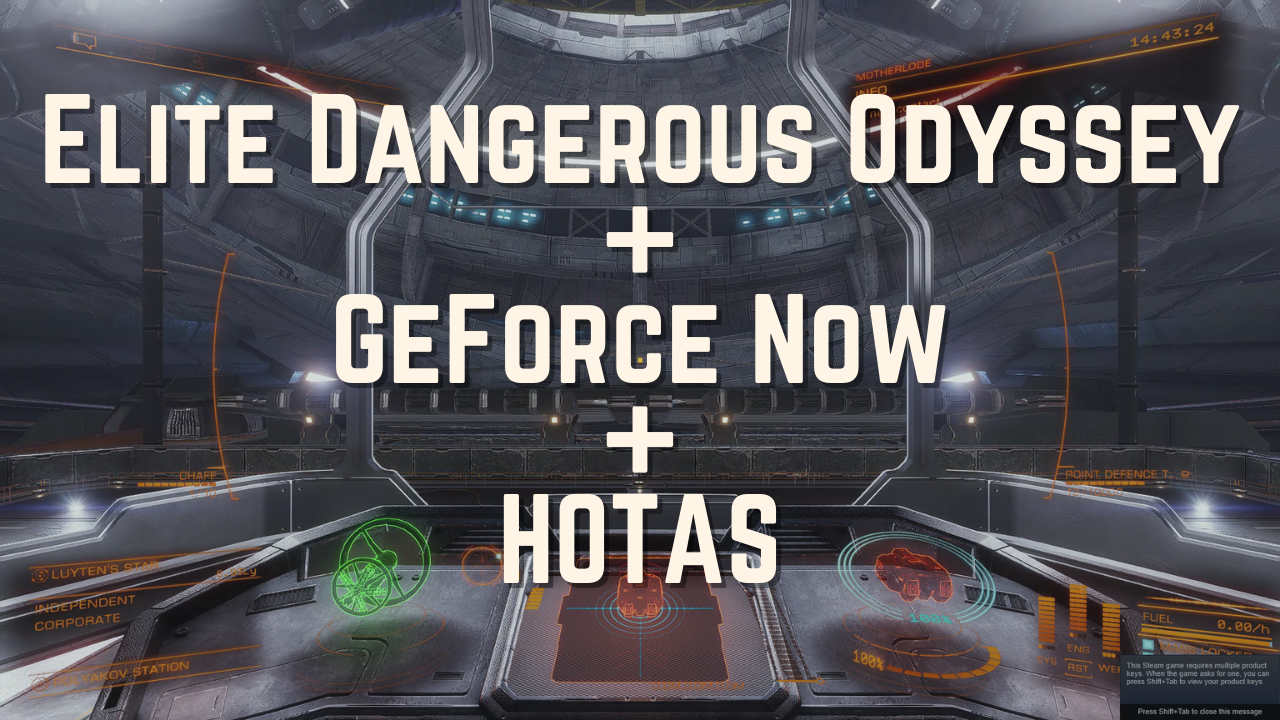 When Elite Dangerous was first launched, all I had was a basic Microsoft joystick. It worked to play the game but as it turned out, playing it with  mouse and keyboard was actually a better experience. It allowed more flexibility when controlling the ships of ED. It wasn’t until a couple of years ago that I invested in a HOTAS setup from Thrustmaster for use both with Elite Dangerous and Microsoft Flight Simulator. It worked great and it brought new life to a game I hadn’t played for years because I didn’t have the equipment.

Fast forward to the release of Odyssey. The thought of being able to walk around in the space stations I visited, to set foot on a planet, it was too enticing to pass up. But, there was one obstacle. The laptop I use for gaming was getting up in the years and although it handled Horizons without any issues, it didn’t take long to find out that the unoptimized mess of Odyssey was too much for it to handle, unless I turned down the graphics all the way down. Even then, it wasn’t fluid. The downside was that was that the rest of the game didn’t look as good anymore. I traded graphics quality on the one hand for playability on the other. I would have to do so every time I moved between the different realms of the game. In other words, Elite Dangerous became a chore to play if I wanted to play Odyssey.

That’s when I remembered that Elite Dangerous was also available to play on Geforce Now. A quick playtest revealed that Odyssey actually performs pretty well on Geforce Now Priority tier (and the 3080 tier, as I’ve found more recently).  Problem solved!

Of course, that would be too easy, wouldn’t it?

While GFN can run Elite Dangerous Odyssey without a hitch, it only supports game controllers, such as the XBox controllers etc. not HOTAS. At first, this was a huge disappointment. I had no interest in playing ED with a game controller.

But, after a bit of poking around online I found that I might be able to work around this issue with apps like AntiMicroX or JoyToKey. Through these apps you can assign the controls of your joystick to specific keys on your keyboard, keys that you then assign the appropriate action inside whatever game you may be playing. Exciting, right?

As it turns out, these apps work pretty well. They’re not perfect and they have some quirks of their own you’ll have to get used to. For the most part, however, they do provide an avenue to play Elite Dangerous Odyssey with a HOTAS setup using GeForce Now.

1. A Copy of Elite Dangerous

To play Elite Dangerous through GeForce Now, you’ll need a copy from either Steam or the Epic Games store.

I haven’t tried Elite Dangerous on the free tier, so I can’t speak to how the game performs. Based on how it performs on my old laptop, it may work just fine. However, on both the Priority tier and the RTX 3080 tier, it plays fine. The free tier is a good start if you want to experiment with the setup before committing (assuming you don’t mind waiting in line at times).

Although there are a number of HOTAS setups available out there, I’ve been using the T-Flight HOTAS by Thrustmaster (affiliate link). It was released about the same time as Microsoft Flight Simulator 2020, which is why I got it in the first place. It’s fairly affordable and you can pick it up Amazon (link above).

Since I use GeForce Now on both Linux and Windows (there are various reasons for this I won’t go into in this post), I’ve explored both.

On Linux (Pop! OS to be precise) I’ve settled on QJoyPad. I discovered that with my HOTAS setup I need three analogue axis. AntiMicroX only appears to support two while QJoyPad easily recognized all three.

On Windows, JoyToKey works perfectly well and recognizes all the buttons and axis of the Thrustmaster.

There are a number of ways you can setup your controls with the above apps and Elite Dangerous. I’ve opted to go with the keyboard + mouse scheme in ED, simply because I’ve found that I like to use my mouse to check out the views now and then. You’ll have to experiment a bit and find what suits you.

Regardless, the general idea is that whatever keys are assigned to your ship controls in ED need to be assigned to the corresponding controls in your Joy2Key app. The big question is: what keys should you use for each axis and button?

They goal for me was to emulate the native app HOTAS configuration as closely as possible. I actually started this process by installing and running the game locally. Then, I jotted down all the HOTAS controls for each axis and each button in a spreadsheet. At that point, I knew what I wanted to my joystick to do.

Then, I changed the configuration in ED to keyboard + mouse. I compared the default key bindings that ED presented with the joystick configuration. It gave me a pretty good idea of what keyboard keys would be appropriate to use.

Next, I added these keys to JoytoKey and started trying out different configurations.

There are a few pitfalls you should be aware of. For one, when you play with a joystick on a native installation, ED assigns a lot of functions to button combinations. X+Trigger may do something, Y+B5 may do something else. For me, this was the trickiest part to get to work right. I found that ED only seems to allow you to do multiple keys if you use one of the modifier keys (SHIFT, CONTROL, ALT) as one of them. I ended up assigning the X, Y, A and B keys to these keys.

You can view my configuration here: https://bit.ly/EDHOTASJoytoKey

Please note that my configuration is still very much a work in progress. It’s very incomplete. At this point, I’ve primarily covered the basics of controlling the ship and I feel comfortable running between the stations trading and such. I haven’t taken a deep dive into combat and such at this point.

For the rest of ED, like Odyssey, I’ve opted to use either keyboard or a game controller.

And that’s the basics. Feel free to experiment with all of the above and if you end up playing EDO on GFN, I’d love to hear what your preferred keyboard layout is for JoyToKey. Or, if you found a better way to do it, please do share!