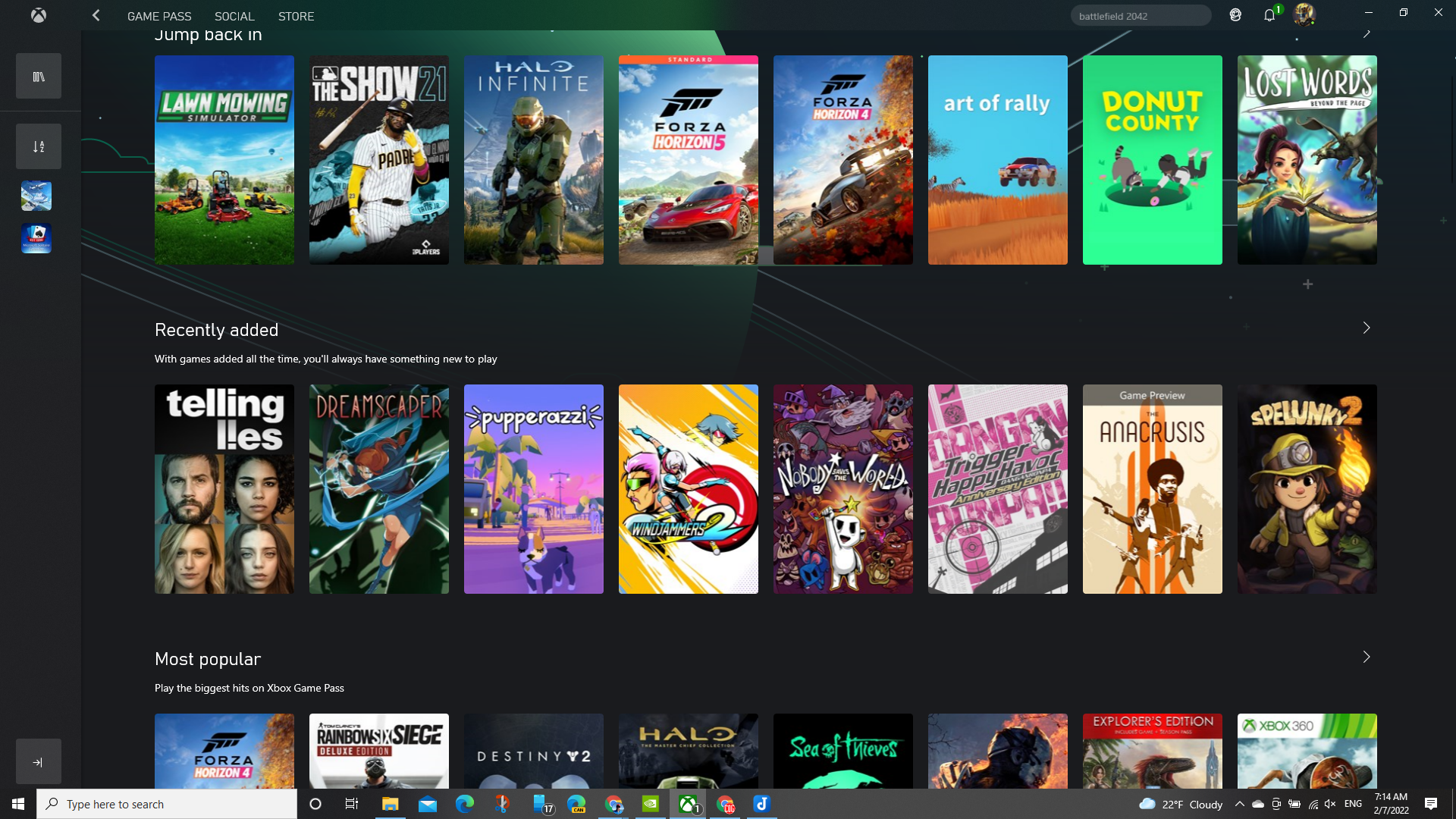 My Thoughts on the XBox Series S, Game Pass Ultimate and XCloud

It’s now been just over a month since our XBox Series S was powered up and my family and I dove into the world of XBox gaming for the first time ever (PlayStation fans up to this point). As I pointed out in another post, getting the Series S was a matter of availability but also a realization that there were plenty of fun to be had even at the lower price point of the S.

Since then, I haven’t regretted a moment. Although I have a whole lot to explore of what the XBox has to offer, I’ve come away very pleased with the investment. In this post, I want to take a peek at how I view the value proposition, as well as my experience with XCloud.

As with any console, if there are no games, what’s the point. Although the XBox can do the media apps too that’s not why I got it. I got it to play games. For me in particular, I wanted to be able to play Microsoft Flight Simulator without shelling out thousands on a new computer. What I saw performance-wise online indicated to me that the S would be sufficient.

My kids have very different gaming needs. My daughter is much more casual. She enjoys Minecraft and other random games while my son is more into the gaming thing (no surprise there). He loves Forza Horizon 5 and has spent countless hours this last month playing it. That is, until he discovered MLB The Show 21. Then he was immediately hooked on that and loudly proclaimed it beats Forza anytime (he’s a baseball fanatic).

For my son, those are the only two games he’s really cared about. He’s shown interest in SnowRunner but hasn’t played it yet. The way I figure, if I would have bought those games outright, that would have been at least $60/game. That’s $120. Instead, I went with GamePass Ultimate for $15/month, which includes both. To me, that’s a no-brainer.

By the time The Show 22 comes out, he’ll be ready to switch but I won’t have to shell out another $60 for the next iteration (although I may actually pay to keep The Show 21 for sentimental reasons). Just my son’s gaming habits makes Game Pass Ultimate worth it bigtime. The only downside is that you don’t own the games.

For me, I’ve barely even scratched the surface of the GPU library. I’ve played Forza Horizon 5 too and come away impressed. Flight Simulator is as good as I had hoped it would be and works perfectly with my HOTAS setup I’ve been using on my laptop.

I’ve also been able to explore games I hadn’t thought about trying before, like Lawn Mowing Simulator. Any fan of games like American Truck Simulator will appreciate this one. It’s a relaxing (to me) game that takes you around the community mowing lawns for money. It reminds me of my own weekly chore of hopping on my riding mower and getting the grass cut while I relax with an audiobook. I also tried Halo Infinite the other day and I was hooked on that one. It’s a fun game that I suspect I’ll be playing much more if in the future.

Obviously, the S has somewhat limited space. 500GB. With Forza Horizon 5 and Flight Simulator installed (streaming scenery on this one to reduce installation space), there’s abut 100GB left. This includes a few other smaller random games. The Show 21 would take up 70 or so if installed. Lawn Mowing Simulator and Halo Infinite would max that out. In other words, without XCloud, playing the games we’ve played so far wouldn’t have been as easy.

I’ve been critical of XCloud for a while. Although the library is there, performance has been horrible. I have noticed, however, that picking the right platform helps. On my Series S, XCloud is flawless for the most part. The Show 21 looks fantastic on it. I’ve also played Lawn Mowing Simulator and Halo Infinite through the Windows app, also without major issues. Ok, yes, there’s the occasional pixelation and drop in quality that will happen with any streaming service but latency hasn’t been as much of an issue. I had absolutely no problem playing Halo Infinite.

I’m not sure if something changed there recently, because my experience was very different not long ago. Just before Christmas, XCloud wasn’t fun to use at all with latency being the most significant issue. Now I can even play Forza Horizon 5 on my phone on 4G LTE. Although I can’t do this consistently, previously it was consistently bad. Not anymore.

Regardless, the point is this: I got the XBox to play a certain set of games and I had expected to have to buy an expansion drive before too long. Instead, I’ve been pleasantly surprised by the quality of XCloud and how well it works. It’s not as flexible or as good as Google Stadia yet, but for my current needs, it works very well.

The ability to stream games from the XBox to my laptop is also a feature I wasn’t expecting. For Flight Simulator, for example, it provides an interesting way to compare local and XBox gaming experiences, with the only negative being the lack of HOTAS support when streaming. It’s a great way to continue a gaming session when the kids want t watch one of their show.

Overall, I have no complaints. I know, some of you will likely point out deficiencies in graphics, 4K blah, blah, blah. That doesn’t matter as much to me. As long as it’s fun, the system and the specs don’t matter as much. For me, XBox Series S, GamePass Ultimate and XCloud checks those boxes.